Howard Gordon is the mind behind TV’s longest running spy thriller series, 24. In his debut novel, the stakes are a bit lower than typical Jack Bauer fare. 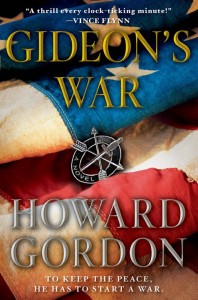 In Gordon’s debut, Gideon Davis is a peace negotiator who sincerely believes in the power of non-violence. His older brother, Tillman, a CIA operative gone rogue, has led an Islamist insurgency outfit to seize a deep sea oil rig, the Obelisk. The President sends Gideon to go to the Civil War ravaged Pacific island and apprehend Tillman. The assignment brings Gideon to the point where he has to abandon his principles in a desperate struggle to keep himself alive, find his kidnapped Uncle Parker and free the Obelisk with his only ally being Kate Murphy, the manager of the rig.

Check out the trailer:

Movie Trailer of Sanctum – An Underwater 3D Extravaganza from James Cameroon
Can you Challenge Destiny & Win? Watch the movie trailer of Adjustment Bureau