Although the CIA tends to have a more glamorous cinematic image, the Federal Bureau of Investigation (FBI) is also routinely featured on the silver screen.  This entry discusses some of our favorite thrillers concerning the exploits (both real and fictional) of the FBI.

5. Thunderheart – FBI thrillers tend to be set in the context of organized urban/international crime, serial killings, or high-level politics.  This one, however, is set on a Native American reservation.  An agent played by Val Kilmer is assigned to solve a murder there, largely because he is part Native American himself.  It all makes for an interesting portrayal of  First Nation culture, a rarity in FBI thrillers.

4. The Departed – Scorcese’s remake of the Hong Kong gangster film Infernal Affairs is one of the few Hollywoodizations of a foreign movie that actually does right by its source.  In the film’s new American context, the FBI sends moles to infiltrate an organized crime ring.  The Departed features a stellar cast in which young actors are able to stand to-to-toe with great veterans. The film was handsomely rewarded both at the box office and on Oscar night. 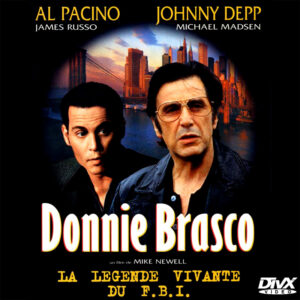 3. Donnie Brasco – The film’s title is taken from the alias used by an FBI agent who infiltrates a major crime family.  Brasco is played by Johnny Depp in one of his best roles, playing opposite a gritty Al Pacino.  Setting this apart from the typical mole-infiltrates-mafia FBI movie is the fact that Brasco’s true identity is nearly cannibalized in the process.  But the real attraction here is that Donnie Brasco is based on a true story.

2. Face/Off – Our runner-up probably has the most unfathomable storyline on this list.  An FBI agent steals the face – the actual face, skin and all – and identity of a criminal.  The two leads (John Travolta and Nicholas Cage) get to essentially switch characters halfway through.  The director, John Woo, handles the outrageousness surprisingly well, somehow shaping it into a very satisfying action thriller.

1. The Silence of the Lambs – This film adaptation of Richard Harris’ influential novel is considered a cinematic landmark. Based on a bestselling novel, Anthony Hopkins plays Hannibal Lecter, a cannibalistic serial killer who is hardly less dangerous for being behind bars.  Jodie Foster co-stars as the FBI investigator enlisting Lecter’s help to track another killer.

4 Responses to Best Movies: 5 Best Thrillers about the FBI