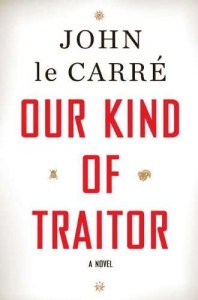 The author of The Spy Who Came in from the Cold (1965), The Russia House (1989) and The Constant Gardner (2001) has conjured up another tale of foreign intrigue with his latest, Our Kind of Traitor. Among living writers, John Le Carre is the undisputed king of the genre, and he would certainly be considered for the top spot on the all-time list as well. Himself a former British spy, he made the top of our list of real-life spies  who have become novelists. He counts Presidents as fans of his spy thrillers, most recently Barack Obama. So it’s with much respect and anticipation that we present his latest book trailer.

Perry and Gail are idealistic and very much in love when they splurge on a tennis vacation at a posh beach resort in Antigua. But the charm begins to pall when a big-time Russian money launderer enlists their help to defect. In exchange for amnesty, Dima is ready to rat out his vory (Russian criminal brotherhood) compatriots and expose corruption throughout the so-called legitimate financial and political worlds. Soon, the guileless couple find themselves pawns in a deadly endgame whose outcome will be determined by the victor of the British Secret Service’s ruthless internecine battles.