The first scene of director Christopher Nolan’s new psychological thriller, Inception, thrusts moviegoers into what seems to be the middle of the narrative: Leonardo DiCaprio washed up onto a beach, looking up at what appears to be an Edo-period Japanese fortress. As we later learn, disorientation is one of the rules of Nolan’s impressive new world: in dreams, we are told, you never remember how you got there. 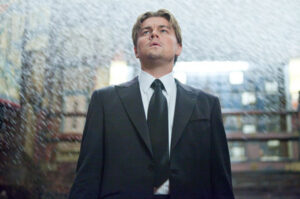 Much like the original Matrix movie, Inception carefully defines the very rules of physics and survival early on, then introduces characters that will either leverage or break those rules en route to fulfilling their individual destinies. And as in the Matrix, Nolan’s surrealism bears just enough resemblance to our own to be believable. Inception proves to be much more than standard summer thriller fare; the film comes with a mythology so compelling that audiences will be begging for a sequel.

DiCaprio’s performance is, at least emotionally, a retread of his performance in Martin Scorcese’s Shutter Island. Still, the role here seems tailor-made for the brooding, borderline unstable heft that he seems to deliver so effortlessly. As we’ve seen in past films, DiCaprio is perfectly servicable in action films, and he is every bit as confident with a gun in his hand in Inception.

It’s Nolan’s direction that really steals the show. The pacing is brilliant and the visuals are absolutely arresting, including a zero gravity sequence that is unlike anything that has ever appeared in cinema before.

Thrillers: 100 Must Reads Released
Watch the Trailer for the New Jessica Alba Thriller

2 Responses to Christopher Nolan’s Inception is an Instant Classic