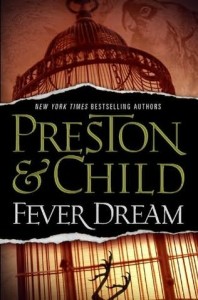 Preston and Child are bestselling coauthors of 13 novels: Relic, which was made into a number one box office hit movie, Mount Dragon, Reliquary, Riptide, Thunderhead, The Ice Limit, The Cabinet of Curiosities, Still Life with Crows, Brimstone, Dance of Death, The Book of the Dead, The Wheel of Darkness, and Cemetery Dance.

In Fever Dream, Special Agent Pendergast is putting to rest long-ignored possessions reminiscent of his wife Helen’s tragic death, only to make a stunning-and dreadful-discovery. Helen had been mauled by an unusually large and vicious lion while they were big game hunting in Africa. But now, Pendergast learns that her rifle-her only protection from the beast-had been deliberately loaded with blanks. Who could have wanted Helen dead…and why?

With Lieutenant Vincent D’Agosta’s assistance, Pendergast embarks on a quest to uncover the mystery of his wife’s murder. It’s a journey that sends him deep into her past where he learns much that Helen herself had wished to keep hidden. Helen Pendergast had nursed a secret obsession with the famed naturalist-painter John James Audubon, in particular a long-lost painting of his known as the Black Frame.

As Pendergast probes more deeply into the riddle—the answer to which is revealed in a night of shocking violence deep in the Louisiana bayou—he finds himself faced with an even greater question: who was the woman he married?