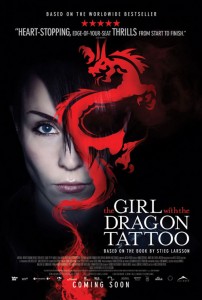 The Girl with the Dragon Tattoo Movie Poster (Swedish Version)

Walking through Barnes and Noble yesterday, we spotted no less than four shoppers lining up with softcover copies of Stieg Larsson’s international bestseller The Girl with the Dragon Tattoo. While the book has finally caught fire in the U.S., it seems that more people know about the upcoming American film version than the original Swedish version.

If you missed the Swedish version’s U.S. theatrical release – it was in just 202 theatres, and fleetingly at that – now is your chance. The DVD is widely for sale, available for viewing on Netflix and also available for rental on iTunes. Don’t make the mistake of waiting for the American version of this outstanding thriller.

The film’s riveting plot unwinds amidst harsh Swedish winters, the darkest of family secrets and remote locations where no one can hear you scream. The film’s protagonist, Mikael Blomkvist (Michael Nyqvist), is an investigative journalist who finds himself on the wrong end of a libel suit. Facing jail time, he is approached with an offer he can’t refuse: solve a 40-year-old murder, and receive classified information about the corrupt tycoon who has put him in jail.

Before long, Blomkvist is knee-deep in aging Nazis, a murdered girl’s teenage diary and a family that would rather see him dead than find the killer. Enter Lisbeth Salander (Noomi Rapace), a 24-year-old hacker with plenty of problems of her own. Still, Lisbeth can’t help getting involved with Blomkvist’s investigation after surreptitiously monitoring his Internet activities. In time, the two make for a sexually explosive yet effective duo, getting themselves into mortal danger even as they uncover a spree of serial murders that went unconnected by local officials.

We smugly predict that Lisbeth Salander will become one of the genre’s more recognizable fictional names, right up there with Hannibal Lecter and Kaiser Soze.

To say more would be to ruin much of the fun.

Don’t like subtitles? See it anyhow. You won’t regret it.