Even if you survived diretor Derek Cianfrance’s Blue Valentine, you’re probably plenty wary of his new crime thriller, The Place Beyond the Pines. Don’t be. Run, don’t walk, to see it. If there’s a better opening five minutes at the movies this year – which is all one uncut take, by the way – I’d like to see it.

Hunky Ryan Gosling plays a stunt motorcyclist traveling with a carnival. When he discovers that someone’s been keeping an important secret from him, he stays in a small New York town and is gradually sucked into a life of crime. Selena Gomez plays opposite. 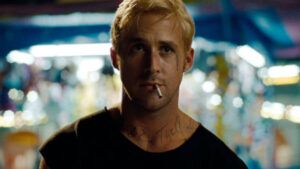 Ryan Gosling as a motorcycle stunt driver with some pretty dreadful tattoos.

To say more about the plot would be a spoiler, but the movie is structured in three well-defined acts that definitely surprise.

Here’s what the Times had to say about the stunt driving:

While Rick Miller, a veteran stuntman, handled the most dangerous scenes, Mr. Gosling, a motorcycle enthusiast, trained for months and performed many stunts. One robbery scene was designed as a single-take set piece that allowed no room for error. “There’s no place to cut or hide a stuntman,” Mr. Cianfrance said. “Ryan had to rob the bank, come out, start his motorcycle — it doesn’t start, finally it starts — go out into traffic, be pursued by a cop, blow through an intersection and avoid, like, 36 cars. We shot that scene 22 times.”