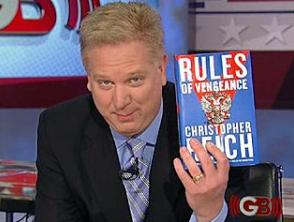 A few weeks ago I posted a blog questioning  the business wisdom of Vince Flynn’s association with Rush Limbaugh and Bill O’Lielly (whoops – I mean O’Reilly). And while I realize that many of you disagreed with my assertion that Rush Limbaugh is too divisive of a figure for a mass market success like Vince Flynn, it was only a week later that Limbaugh’s bid to buy the St. Louis Rams was rebuffed by the NFL because he is too controversial.

I’m sorry, but the NFL is hardly a bastion of liberalism. NFL owners are as pro-business, profit-driven and regular-guy as it gets. So when the NFL says they don’t want Limbaugh’s money because they don’t want to be associated with him, then he might not be the best spokesperson for your mass market thriller. I’m just sayin’.

Which brings me to yesterday’s New York Times, which called conservative talk show host Glenn Beck the Oprah of Thrillers. Beck has pimped books for Brad Thor, James Patterson and many other bestselling authors on his show over the past year. The show has become a unique and highly sought after showcase for thriller writers on television.

And that’s a good thing.