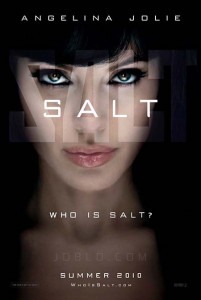 Angelina plays Evelyn Salt, a CIA intelligence agent who is revealed as a Russian spy with a devotion to breathless brute force that rivals Matt Damon’s Jason Bourne character. That much you could probably tell from the Salt movie trailer that’s been playing in theaters for months. But in what could have been a standard cold war film about a rogue CIA agent, the film delivers a juicy backstory about Russian sleeper agents that were programmed as children to live in the United States and activate at an unspecified future date to strike against their arch rival. In a satisfying twist, the cold war is long since over, but the founder of this menacing program is still very much alive and hell bent on bringing America to its knees.

Overall, the plot is outrageously over the top, but believable enough as a Hollywood blockbuster. Jolie kills her way out of innumerable scrapes, and it’s difficult to imagine many actresses with a physique capable enough of making the acrobatic violence vaguely plausible. Thankfully, Jolie plays the role with straight ferocity, leaving her campy spy character in Mr. and Mrs. Smith as a distant memory.

Liev Schreiber and Chewitel Ejiofor are solid foils for Jolie’s antics. There’s no particular reason to catch this one in theaters, but it definitely deserves a place in your home theater movie queue.