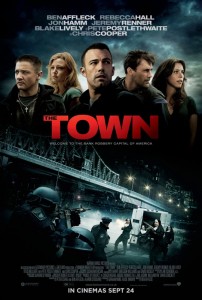 Even while watching The Town, it’s tempting to make comparisons to one of the other big Boston crime thrillers of the decade, Martin Scorcese’s The Departed. Both films were crime dramas set in gritty white Boston neighborhoods. Both cast seasoned screen legends as neighborhood crime lords (Pete Postlethwaite and Jack Nicholson). Both featured one half of the Matt Damon/Ben Affleck duo that broke into Hollywood together in the 1990s. And in both films, the fact that only a few characters will live to see the end of the movie is evident within the first 10 minutes.

But while highly entertaining, Ben Aflleck’s direction in The Town isn’t quite as ambitious as The Departed.  The film’s clever heists are the main attraction, and aside from the character he plays, Doug McCray, Affleck doesn’t waste too much time fleshing out its core characters. Pete Postlethwaite is brilliant as “The Florist,” a crime boss who has enslaved generations of Charlestown thugs into executing his heists. Unfortunately, we don’t see much of him until the final third of the film.  Rebecca Hall is convincing as Affleck’s love interest, who also happens to be the only credible witness to a violent bank robbery.

The Town gets bonus points for featuring one of the best police street battles since Heat, another Scorcese classic.

The film ends in reasonably satisfying fashion, but, perhaps deliberately, the story doesn’t feel quite settled. It’s easy to envision a sequel featuring Doug McCray coming back for one last job, and one last chance at Hall, with John Hamm reprising his role as an FBI agent in hot pursuit.