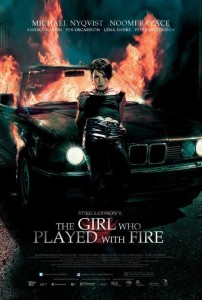 The Girl Who Played With Fire Movie Poster

The first thing you notice about The Girl Who Played with Fire is that it doesn’t feel like a cinematic  experience, either structurally or visually. The movie begins with a series of flashbacks that is, quite literally, a highlight reel from The Girl with the Dragon Tattoo, the first film in the late Stieg Larsson’s Millennium trilogy. Unfortunately, that isn’t the only convention that makes this sequel seem like a late night Showtime TV series. The film also looks decidedly cheaper than its predecessor, which we called one of the best films of 2010.

This television sensibility comes courtesy of director Daniel Alfredson, which is quite unfortunate considering what a masterful job Niels Arden Oplev did with the first film. In Alfredson’s world, for example, sex seems to happen just for the sake of showing an obligatory level of skin. In the first film, sex was an important plot device that both humanized and bonded Lisbeth Salander with friends and enemies alike. It’s handled with all the grace of a whorehouse here, making Blomkvist into an unlikely man slut who screws his co-workers during his lunch hour, and Salander more androgynous and distant than ever.

Thankfully, the original cast has been retained, with Noomi Rapace  doing another fantastic job as Lisbeth Salander, and Michael Nyqvist is again solid and likable as her journalist soul mate, Blomkvist. Separately, their storylines are compelling, gripping and well-acted. Both operate in different worlds in this film until Blomkvist makes a concerted effort to cross over into hers, and the pair don’t appear together until the movies last frames.

No matter how much convincing backstory Larsson’s book offered, they play out as incredulous coincidences in the film, and the connections between Blomkvist’s struggles at Millennium and Salander’s plight are never believable. This is a film where the director should have either fought for extended time to tie the connections together in a more credible way, or departed from the original story for the sake of creating a more cohesive film.

While we’re still cringing at the idea of an American version of the first film, we’re begging for someone to take another shot at this one.