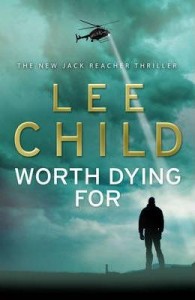 Lee Child has released a brief (as in 15 seconds) book trailer for his recently released crime thriller, Worth Dying For. The novel is another in the popular Jack Reacher series.

We haven’t had a chance to read it yet, but here’s what Amazon has to say:

You’d think that after 14 novels featuring hardscrabble hero, Jack Reacher, Lee Child’s pulse-pounding series would start showing signs of wear. It is nothing short of remarkable that Child is not only able to continually reinvent his ex-military cop, but that each installment is better than the last. Worth Dying For finds our battered hero hiding in plain sight in a tiny Nebraska town, trying to recover from the catastrophe he left behind in South Dakota (no spoilers here, but readers are still arguing over 61 Hours’s cliffhanger ending).