By Bella Wright on September 7, 2010 in Thriller Book Trailers 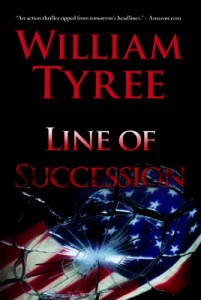 William Tyree’s Line of Succession made our recommended summer thriller reading list back in June, and the publisher has just released an action-packed book trailer. (Note to publishers – why can’t all book trailers have music like this?)

As Congress leaves for its annual summer recess, the nation is rocked by a series of high-level assassinations so devastating that the magnitude is hidden from public view. With the Federal Government in disarray, counter-terrorism agent Blake Carver begins piecing together an ominous set of clues that predate the assassinations: a murdered soldier, encrypted cell phone transmissions, a dozen stolen Stinger missiles and satellite photos of a revolutionary new desalination plant in Iran. If only Carver’s job was as simple as hunting down a group of foreign extremists. But this war isn’t about religion, foreign policy or oil. It’s up to Carver to stop a group of powerful insiders battling over control of the planet’s most precious resource: water.