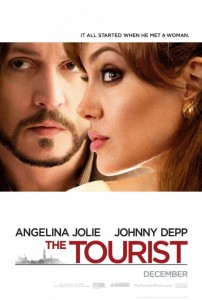 In the 2005 French thriller, Anthony Zimmer, an international force pursued a money launderer who underwent extensive plastic surgery to hide his identity. After plenty of production-related upheaval, the 2010 remake, The Tourist, is finally slated for a December release date.

It’s difficult to find an official plot synopsis for the remake. If the trailer is any indication, however, the film will feature a blend of action, wry wit and romance. ‘