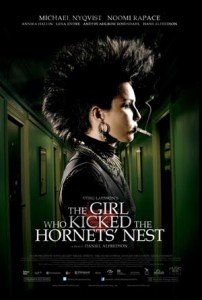 Movie Poster for The Girl Who Kicked the Hornet's Nest

The final film in Stieg Larsson’s Millennium trilogy is finally out in select theatres across the U.S.  Although different directors were used between The Girl With the Dragon Tattoo, The Girl Who Played With Fire, and The Girl Who Kicked the Hornet’s Nest, the films were shot back-to-back, and thus, the original cast has been retained, with Noomi Rapace back as Lisbeth Salander, and Michael Nyqvist as her journalist soul mate, Blomkvist.

Although we dubbed the original film an instant classic, we were a bit disappointed in our review of the second installment, The Girl Who Played With Fire. Nevertheless, we have high hopes that this one will take us out with a satisfying bang.