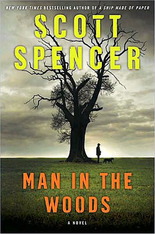 Scott Spencer’s new thriller is getting rave reviews from the Washington Post, Booklist and others. The trailer features some nice action to the backdrop of Spencer himself reading the sort of jaw-dropping prose that doesn’t often arrive with genre fiction. Here’s the synopsis from Publisher’s Weekly:

Paul Phillips, a master carpenter, is living in bucolic upstate New York with Kate Ellis, the woman Spencer first introduced, along with her beguiling daughter, Ruby, in A Ship Made of Paper. But Paul’s life begins to implode after a chance encounter results in an irrevocable act that no one witnesses, save a mixed-breed dog he renames Shep. Paul suffers the burden of his terrible secret: the fear of discovery and punishment and the equally disturbing fear of getting away with his crime.