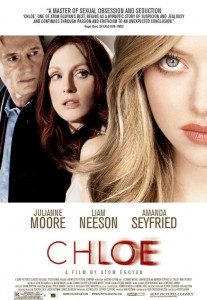 Amanda Seyfried, who played the daughter of Mormon polygamists to perfection in HBO’s Big Love, stars in Chloe, a new thriller directed by Atom Egoyan.  In the film, Seyfried is hired to seduce the husband (Liam Neeson) of a doctor (Julianne Moore) whom she suspects of cheating.

Suspicion, jealousy and gynecology do not make for a happy family.  However, it does result in a steamy lesbian scene between Seyfriend and Moore. Check out the video trailer.