Judging by our list, the golden age of legal thriller movies may have been in the 1990s, when John Grisham seemed to rule not only the bookstores, but also the box office. But while there may not be quite as many legal thrillers hitting the silver screen in the 2000s, note that our #1 pick is from 2007. To make our list, a film must have featured an attorney and his staff as the primary protagonists, and that protagonist must been in mortal danger at some point during the film.

5 – The Pelican Brief – Based on one of bestselling author John Grisham’s most popular novels, the Pelican Brief became the prototypical legal suspense thriller that served as the standard for dozens of films after it.  The movie begins with the simultaneous assassination of two Supreme Court Justices with completely different ideologies and no apparent social connection. This unlikely crime created the ultimate occasion for an ambitious law student, played by Julia Roberts, to write a brief that leads to a nail-biting investigation.

4 – Primal Fear – Primarily remembered for an incredible twist in the film’s final minutes, this 1996 film also served as Edward Norton’s breakout performance. Richard Gere stars as the attorney who tries to defend a young mentally disturbed altar boy accused of murder. The film reaches as fever pitch as his client, a certifiable sociopath, nearly kills his defender. 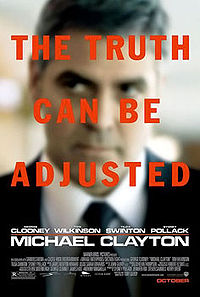 3- The Client – Try as we might, we couldn’t keep Grisham’s name from appearing on our list yet again. Based on his classic 1994 legal thriller, the film depicts a young witness who is torn between two lawyers with morbidly divisive agendas.  The late, lamented Brad Renfro stars as the eponymous client.

2- A Few Good Men – “You can’t handle the truth!” Based on the Aaron Sorkin play, this film about two attorneys defending Marines launched a billion Jack Nicholson imitations. The star power of Tom Cruise and Demi Moore made it a box office smash, while Nicholson’s loopy villain, and Sorkin’s terrific screenplay, gave it enough depth to qualify as a classic.

1- Michael Clayton – This 2007 thriller earned a slew of Academy Award nominations, including a Best Actor nod for George Clooney’s portrayal of an attorney who uncovers a massive corporate cover-up. By the second act it seems that everyone is out to kill Michael Clayton, including some loan sharks that he’s into for $75,000 in gambling debt. Clayton is a multi-dimensional character who would be highly compelling and sympathetic in any genre, which is why there’s so much at stake by the climactic ending.

One Response to Best Movies: The 5 Best Legal Thrillers of All Time