We lost a great thriller writer today – the great Vince Flynn has passed from prostate cancer.

Here’s how the LA Times reported it: 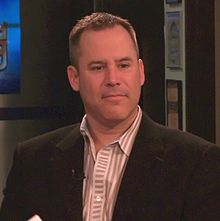 Vince Flynn, 47, a best-selling author who wrote the Mitch Rapp counterterrorism thriller series, died Wednesday at a hospital in St. Paul, Minn., after a more than two-year battle with prostate cancer, according to friends and his publisher.

Flynn was supporting himself by bartending when he self-published his first novel, “Term Limits,” in 1997 after getting more than 60 rejection letters. After it became a Twin Cities best-seller, Pocket Books, a Simon & Schuster imprint, signed him to a two-book deal — and “Term Limits” became a New York Times best-seller in paperback.

The St. Paul-based author averaged about a book a year, most of them focused on Rapp, a CIA counterterrorism operative. His 14th novel, “The Last Man,” was published last year. He counted former presidents George W. Bush and Bill Clinton among his fans, as well as foreign leaders and intelligence community figures.