The Bottom Line: A breathless, blistering psychological thriller guaranteed to hold you captive until the very last page is read. 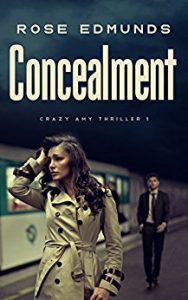 The financial services industry is well-known for its cutthroat culture, and Rose Edmunds’ scathing novel, Concealment, adds a layer of deliciously loathsome behavior to the sector’s reputation.

The story is told from the point of view of Amy, a powerful finance executive. For Amy, every interaction with another human being is a potential attack to be analyzed and countered. Her colleagues are “puppets” and “opportunistic robots,” and her boss, Ed Smithies, is “sinister,” “grating,” and “miserly.”

While Amy’s inner thoughts are an endlessly entertaining stream of hilarious insults, she’s also straightforward and outspoken. Here’s the boardroom comment – preceded by a call for diverse hiring practices – that gets her in hot water with her boss: “Look, you guys. Diversity doesn’t mean filling every job vacancy with a black lesbian in a wheelchair. It’s not some box-ticking formulaic exercise—it’s about people.”

It’s easy to see why Amy is such a brilliant protagonist. Beneath her exhausting bitterness, she has the guts to say what other people are too afraid to. That quality is precisely what will make many readers want to root for her. And despite her rock-hard veneer, she’s actually quite fragile. Edmunds plays on Amy’s vulnerabilities like a master violinist.

Office drama is already at a fever pitch when Amy’s subordinate Isabelle Edwards goes missing. Days later, Isabelle is found floating in the Grand Union Canal (In case you’re wondering, Amy is not exactly grief-stricken: “I hated the suave little bitch, but I’d recommended her for promotion anyway”).

Soon, Amy realizes that she’s suspected as an accessory to murder. Her alleged co-conspirator is her former brother-in-law (and ex-lover, and subordinate), Ryan.

Thriller fans are strongly advised to dig in and find out.