The Bottom Line:  Dennis Lehane fans looking for their next crime thriller should check out this authentic and searing tale from Alan Brenham. 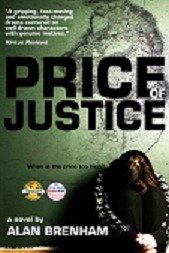 Is vigilante justice ever the best answer? That’s one of the central questions posed by Alan Brenham’s compelling thriller, Price of Justice.

Austin Police Detective Jason Scarsdale is a troubled man. He blames himself for the tragic loss of his wife, Charity, and is left to raise his daughter by himself. Adding to the considerable weight on his shoulders, Scarsdale is investigating the murder of two pedophiles while under the close scrutiny of police leadership. It’s no wonder he’s tempted to eat the business end of his weapon.

Enter the woman who seems destined to be his soul mate, Dani Mueller. Mueller is a crime analyst who’s also had her fair share of tragedy. But as he begins to trust Dani and let her into his life, Jason doesn’t realize that she’s hiding not one, but two dark secrets.

Price of Justice is a complex police procedural in which no one is truly safe. Brenham, a Texas criminal law attorney and former law enforcement officer, has woven a web of intrigue where threats are coming from multiple directions at once. Adding additional texture are occasional chapters told from the point of view of Dani Mueller. It’s a risky literary technique attempted by many but mastered by few. In Price of Justice, it pays off because it allows us into the mind of Dani early in the book.

What sets Price of Justice apart from other crime thrillers is the depth of the characterization, which rivals what Dennis Lehane is able to achieve in his best work. It’s easy to empathize with Jason, and as much as he needs Dani, we know that theirs is going to be an emotional journey fraught with danger and trust issues. Through it all, Brenham’s Austin comes alive on every page, and time with his characters is well-spent indeed.

Beyond Fate, a new Supernatural Thriller by John B. Albion
Book Review: Cornered, a Crime Thriller by Alan Brenham