The Bottom Line: A return to form for one of science fiction’s most important voices. 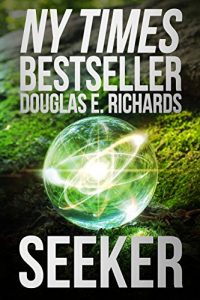 When a UFO lands in the heart of the Amazon Jungle, powerful nations around the world will unite to communicate with the aliens, right?

Wrong. They’ll be even more ruthless than usual, stopping at nothing to retrieve it. Because the unoccupied alien craft is sure to contain revolutionary technology. Technology that will allow the country that controls it to dominate the globe.

With the probe hidden within the densest rainforest on Earth, traditional military power is useless. So the US chooses to send in a single operative, a man who’s been enhanced to the limits of current technology.

He’ll be greatly outnumbered, and with so much on the line, not even the closest of allies can be trusted.

With Seeker, Richards returns to the level he demonstrated with Split Second – a novelist capable of crafting an addictive thriller, rather than the futurist moonlighting as a fiction writer. While Richards is all in on the plot, he doesn’t shortchange us on the hair-raising geopolitics, either. Considering the era in which we live, where alliances and treaties are falling apart at an alarming rate, Seeker turns out to be one of the more thought-provoking novels you’ll read all year.