With the holiday season upon us, the year’s major political thrillers are now in wide release. The genre’s most prolific authors put out another bumper crop of assassins, rogue intelligence agents, dirty politicians and bleeding edge technology. Relative newcomers stormed the scene, finding more readers than ever thanks to Amazon’s Kindle.  Here’s how our list shapes up:

Pursuit of Honor, by Vince Flynn

CIA Agent Mitch Rapp is on the case again as terror hits Washington D.C. Flynn’s prose may be completely pedestrian, but that’s hardly the point. The plot is completely gripping, Flynn’s research is admirable and his style is thoroughly readable.

Patriots: A Novel of Survival in the Coming Collapse, by James Wesley Rawles

If you think Cormac McCarthy’s masterpiece The Road is depressing, wait until you read Rawles’ description of Chicago in the not too distant future. This book makes our list not because the writing is particularly good, because it’s not — the characterizations and narrative are both very weak. But the author’s detailed survivalist techniques are stunning. The book’s fans have launched it so high into Amazon.com’s sales rankings that it cannot be ignored.

The Apostle, by Brad Thor

Homeland Security operative Scot Harvath must find the kidnapped daughter of a politically connected family in the terrorist frontier of Afghanistan. Not the most original plot that was ever conceived, but the writing makes this book gripping nevertheless. 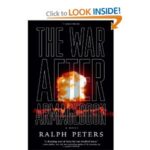 The War After Armageddon

The War After Armageddon, by Ralph Peters

In this terrific thriller, Ralph Peters envisions what can only be described as a Muslim extremists’ wet dream. With many of the world’s great cities having been attacked by extremists, the Christian world embarks on the crusade to end all crusades.