The Bottom Line: A riveting police procedural about a man who descends from a line of metaphysical prophets called The Marked. Highly recommended. 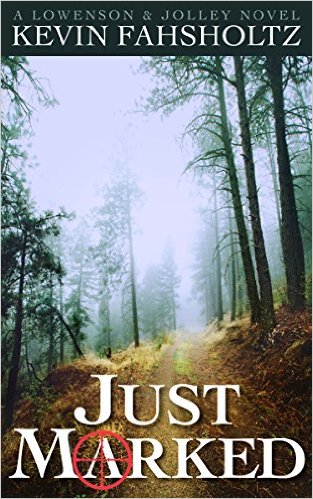 If given the chance, would you turn back time and relive the past 20 years of your life? Most would say yes. But as middle-aged Seattle resident Matt Lowenson discovers, second chances come with great responsibility.

After one of the most depressing days of his career, Matt wakes in his childhood bedroom. Everything in 1983 as he remembered it – including his 17-year-old teenage body – except a new birthmark, and a stranger who appears to guide his transition back in time.

As Matt soon learns from his new mentor, Julia Simpson, he’s joined the ranks of The Marked, an ancient lineage of influencers that walk among us. From this day forward, he’ll be cut off from his family in the future and living his life anew in the past. But his gift – and his burden – is an awareness of the future as it happens.

Meanwhile across town, area detectives Alex Jolley and Carl Williams are looking for a serial rapist who just committed his first murder. They have no strong leads until they get a phone call from Matt, who instantly reveals a piece of information about the suspect that only someone with inside knowledge could know.

Without the benefit of Matt’s metaphysical journey, what follows might be a fairly standard police procedural, which includes the graphic crime scene descriptions that fans of the genre expect. But fortunately, Just Marked is distinguished by its levity. When Matt first calls Jolley, he’s had little time to adjust to his new physique, and he has a bit of trouble describing himself (“I’m around six feet. No strike that, I’m only five foot ten right now, one hundred fifty pounds, dirty blonde hair”). Later, Jolley is taken aback at the maturity of the 17-year-old who stands his ground despite Jolley’s attempts to rattle him as a possible suspect (Alex: “Maybe you get your rocks off messing with cops.” Matt: ““I could do that with a lot less risk, believe me.”) And being the son of two attorneys, few can understand Matt’s enthusiasm for his job in Microsoft’s shipping department, which he describes as a “permanent” career move. The cumulative effect is hilarious, and even as you’re caught up in the novel’s more tense moments, the dichotomy of the 40-something tech worker in a teenage body is what will keep you turning the pages.

If you’ve ever fantasized about going back in time to fix something in the past, Just Marked is a great pick.