The Bottom Line: Go ahead and call in sick right now. This psychological thriller is so addictive that you’ll be tempted to devour it in one sitting. 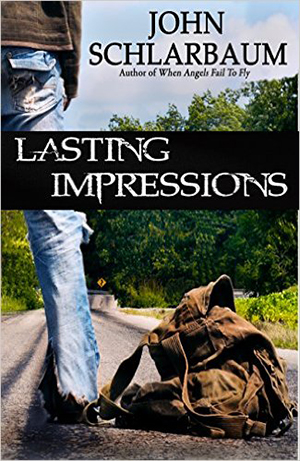 Dale Hawks is a mysterious drifter with dazzling eyes, a handsome face, hair like Elvis and the uncanny ability to make the women he meets feel as if destiny has drawn them together. The effect Dale has on women is similar to that of the devil-like character in John Updike’s classic The Witches of Eastwick. But Lasting Impressions is a much darker work, more reminiscent of Stephen King in tone and style.

We witness Hawks’ alluring power early in the book, as a past-her-prime barmaid – rendered spellbound by Hawks’ charms – frantically applies makeup just moments after he casually mentions that he was accused of brutally murdering a past girlfriend and then kisses her. Soon, Hawks switches off the charm just as fast, crushing her spirits with deplorable behavior just for sport.

But Hawks’ prime targets are impressionable teenage girls, and the riveting way in which he charms them is what prompted us to devour it in one sitting. Schlarbaum has a gift for tapping into the more fragile elements of the human ego, a talent that manifests itself through Dale’s psychological assaults throughout the book. His power is terrifying, and is nicely juxtaposed with Jeremy Atkins, a local golden boy who is prepared to go head to head with Dale for the soul of his girlfriend. Son of the mayor, and dominant in his social circle, Jeremy is the sort of literary character that is typically rooted against. But thanks to Schlarbaum’s expertly crafted tale, he comes off as an unlikely and complex anti-hero.

Who will survive Dale Hawks’ visit to Lasting? Read it to find out.