Can two of LA’s most dedicated crime fighters stop the city’s most notorious serial killer? 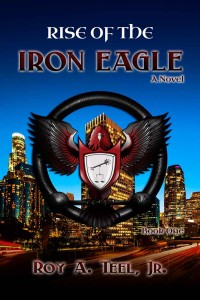 Jeff Lindsay’s classic novel, Darkly Dreaming Dexter, gave rise to a completely new kind of protagonist – a serial killer that hunts serial killers. Roy A. Teel Jr.’s Rise of the Iron Eagle is proof that even the best ideas can be improved upon.

Although set in contemporary LA, Teel has wisely given the book a vintage noir feel. Like the best LA noir, which runs counter to the city’s sunny climate, the book is full of shadowy places and shadowy people. Instead of machine guns, there are several vintage shotguns. Instead of drones, there are surveillance systems. Instead of hackers, there is a cyber crime unit, where the geeks aren’t the cool kids (one of them is addressed as “cyber boy”). Teel even manages to sprinkle in vintage pulp dialogue as appropriate: “Can yous spares a cuppa bucks for a fellow drunk?”

One word of warning for more sensitive readers: although the book is every bit as grisly as you’d expect, the language is far rougher than most. There are nearly 100 f-bombs in 281 pages.

Like the best work in this genre, readers may find themselves in a moral quandary: with the Iron Eagle administrating so much quick justice to so many awful people, do you really want O’Brian and Hoffman to find him (or her)? Check out Rise of the Iron Eagle and decide for yourself.