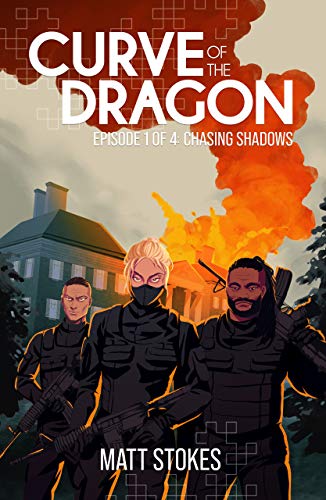 In the novella’s bewitching opening chapter, a disoriented former soldier wakes in a D.C. hotel. Despite a nagging sensation that something is awry, he goes willingly to the British Ambassador’s residence while a so-called doctor gives him directions through a device embedded within his brain.

Armed with a handgun, he finds himself threatening the ambassador’s family in order to extract a password to a blue box. Once his mission is complete, a bomb embedded within his skull explodes, killing him and everyone else in the room.

As the first entry in Matt Stokes’ Curve of the Dragon series goes on, we learn that the organization behind the attack is called Fractal. Across the globe, remote-controlled soldiers are used to attack strategic targets. But why?

Enter Stokes’ protagonist, 25-year-old Will Taylor. Will is a gifted engineer whose side jobs include freeing criminals from ankle monitors and programming car alarms. But here’s what will make readers root for him: he’s saving up money in hopes of heading to Afghanistan to search for his sister, Laura, a Navy SEAL who is missing in action.

Will hasn’t told anyone what he has planned, which is why his world is turned upside down when an anonymous person reaches out to offer help.

Stokes hits the right notes in this first series entry, which at a concise 133 pages, will whet readers’ appetites for three additional episodes to be released over the next few weeks.

His deft use of bleeding edge tech, poised with the prospect of Will using his considerable skills to find his sister, will have most readers pining for the series’ second installment.