When Cambridge physicist Professor Ralph Frederick is summoned to the office of wartime Prime Minister Winston Churchill he is given a very unusual task. 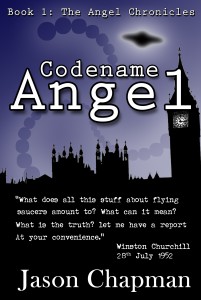 Frederick is put on a top secret committee Codenamed Angel, who’s role it is to investigate flying saucer sightings which have been happening up and down the United Kingdom.

Frederick’s world is turned upside down, as a diehard sceptic is soon turned when he encounters beings from another world.

Set during the 1950s Codename Angel packs a mixture of Cold War tension and flying saucer paranoia. Based on real life flying saucer sightings and drawn from a memo that Winston Churchill actually wrote in 1952.

Codename Angel is a blend of intrigue, science fiction and hidden history.

The first in a book series that spans the second half of the 20th Century and beyond.