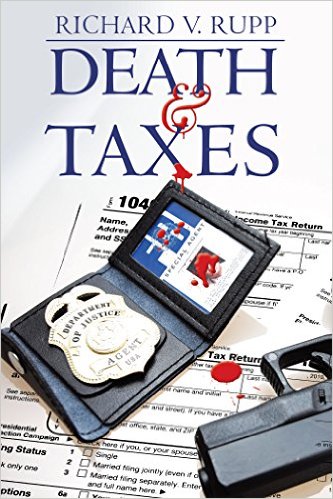 An IRS auditor is found dead at work from a gunshot wound with a small-caliber pistol. Was it suicide, or murder? That’s the question posed to FBI agent Dick Hartmann, head of San Francisco’s Violent Crime Squad. Readers know far more from the outset than Hartmann does (it was murder, of course), but Hartmann’s journey is riveting nonetheless. The case leads him to the IRS mailroom, to a local street gang and eventually, to Los Angeles.

Author Richard Rupp’s gift for strong characterization make Death & Taxes a riveting read from page one, when the Disney characters adorning the IRS walls seem to agitate the killer (“Were the powers that be simply implying that the IRS tax rules were akin to Alice in Wonderland?”). Later, our introduction to Hartmann comes as he’s reading a copy cup intended to, ahem, stroke the ego of anyone named “Dick” (“Meaning: Powerful; mighty and great…”).

Within the context of a smart police procedural, Rupp makes sure we’re firmly inside the characters rather than merely watching from a distance. That brings immediacy to every scene, whether the perp is ditching a getaway car, or Hartmann is meeting celebrity chef Wolfgang Puck.

Throughout, the divide between white and Latino society in California is a recurring theme. Rupp holds a mirror up to contemporary society’s socio-economic divides and succeeds wildly, managing to both illuminate and entertain while never letting up on the tension established in the opening chapter.