The Bottom Line: Magical, mysterious, sensual and utterly profound. One of the year’s best thrillers. 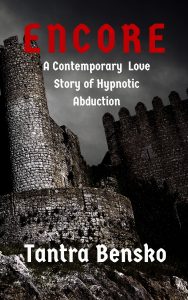 When the dying star of a famous performance troupe goes missing right before show time, her standby, Miriam, prepares to take her place in the performance. As is their custom, Dune, the troupe’s leader, hypnotizes her before the curtain rises. In her trance, she believes she is Susan, the leading actress, and Dune’s wife.

Typically, the spell breaks when the curtain falls after the final encore. Not this time. Dune takes Miriam, who still believes she is cancer-stricken Susan, to a castle owned by an alchemist. During the ride, she can’t recall key details of their life. Their electric chemistry. Their wedding. Even the castle owner’s name. And yet, she remembers, Miriam (her true self), from Susan’s point of view, unlocking a scintillating combination of envy, jealousy and passion.

Will Miriam’s friend, Colin, come to her rescue? Will someone find the real Susan, and when they do, will she still be alive?

Tantra Bensko’s Encore is one of the most sophisticated romantic suspense novels in recent memory. Like Diana Gabaldon’s Outlander series, Bensko weaves in history, real-world myths and legend into the novel. But make no mistake, this is an utterly contemporary piece of work. Beyond the series’ theme of exposing social engineering, the novel explores the attraction of cult leaders and the role of power in sexual fantasies (favorite line: “Some mass murderers were attractive. I would have fallen for them. Scary”).

Book clubs will have need overtime to devour all the references to the occult, literature and art, to say nothing of the Shambhalla and Atlantis. But readers need not be overly cerebral to enjoy Encore as a romantic suspense novel. While technically Book 3 in Bensko’s Nevermind series, the novel is a perfect entry point to the work of one of today’s most distinctive voices.