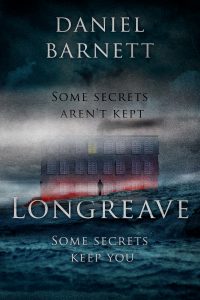 Set in a hotel called Longreave, situated in the fictional Atlantic seaboard town of Manxfield, author Daniel Barnett delivers plenty of creepy ambiance, especially when he introduces Mark Currier, a man who is picking up the pieces after a failed marriage. Mark isn’t unfamiliar with the hotel. His father worked there years ago and he’s currently employed there, too. What he’s not accustomed to? Life after his marriage crumbles. Readers get a few hints as to why, but the author is sparse with direct hints, making for a constant tension that smolders under the surface. Mark’s wife, Alice, paints macabre portraits while he devotes himself to the restoration of the hotel.

Overall, Barnett paints in broad strokes. Readers won’t be quite sure if the apparitions are real or the result of a man’s spiral towards insanity, but there are just enough clues here and there to create an intriguing psychological mystery with potent doses of the paranormal. In terms of a setting, Longreave feels every bit as distinctive as Stephen King’s Overlook Hotel. Set in foggy, grey environs and the dark recesses of a crumbling historic hotel, readers and characters alike are surrounded by the unknown no matter where they are. The overall effect is mesmerizing.

With tense dynamics between husband and wife, father and son, and even man and dog, there’s no telling where the story is headed at any given moment. That excitement, along with Daniel’s polish and engaging writing, makes for a gripping read that has as many dark corners as Longreave itself.