The Bottom Line: A genius terrorism thriller guaranteed to change the way you think about air travel. 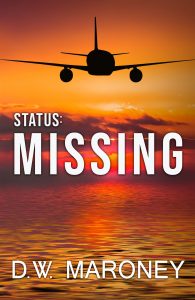 Following the disappearance of Malaysia Airlines Flight MH370 in 2014, Air Force Intelligence Officer Major Megan Sloan has watched helplessly as a succession of jetliners suffered the same tragic fate every few months. Having ruled out pilot suicide as the cause, Sloan’s team had arrived at a seemingly impossible theory: that someone had developed the capability to turn virtually any aircraft into a drone and fly it remotely from the ground.

Just months after a French airliner with 200 aboard vanishes within a trace over the Indian Ocean, Sloan’s team detects something that appears to predict that a plane will go missing, only to watch it happen before their very eyes.

The genius of D.W. Maroney’s debut thriller is this: the only thing more terrifying than the mystery of unexplained phenomena is learning the truth. If a nation with nuclear capability is found to be the culprit, the consequence could be World War III. And if a lone wolf or terror group had managed to pull it off, no commercial airliner will be safe until the perpetrators are brought to justice.

Told largely from Sloan’s perspective, Missing is a high-stakes affair from the start. As a protagonist, Sloan, part of a team that attempted to recover a lost CIA drone from Iran, is compelling enough. But what really makes Missing work is the book’s perfect pacing, wider cast of thoughtful analysts and their crackling dialogue. Clocking in at just around 300 pages, this lean, thoroughly satisfying thriller can, ironically, be easily enjoyed on a long flight.