Tom Clancy practically invented the military thriller. Command Authority marks the first release since the author’s death, with Mark Greaney credited as a co-author. It’ll be interesting to to see whether Greaney will continue to author the Clancy franchise in the future, or whether the publisher is content to let Clancy’s empire remain as-is.

The #1 New York Times-bestselling author and master of the modern day thriller returns with his All-Star team.

There’s a new strong man in Russia but his rise to power is based on a dark secret hidden decades in the past. The solution to that mystery lies with a most unexpected source, President Jack Ryan. 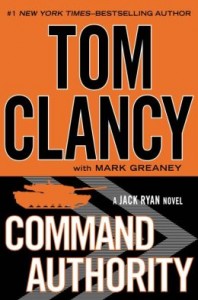