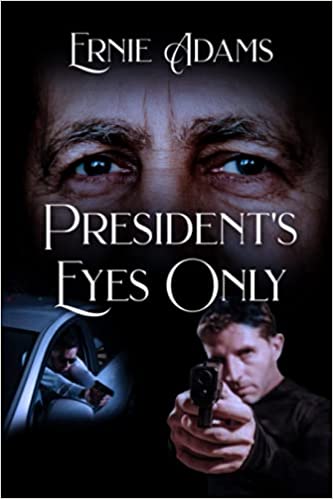 Set in 1976, President’s Eyes Only begins with the brutal murder of a CIA black ops agent and a Hollywood starlet in Las Vegas. At stake is a set of top-secret microdots intended for the President of the United States. For those not familiar with the technology, microdots were a World War II-era invention that shrunk sensitive text and images down to microscopic size.

Enter fellow CIA operative Alexander Temple, who is tasked with retrieving the classified information. Temple’s handler discloses the name of a mafia-connected casino owner who he believes is about to auction the microdots to the highest bidder. And the next thing he tells Temple instantly raises the stakes to a fever pitch: the microdots contain evidence that the U.S. government recovered a UFO with alien lifeforms aboard.

Author Ernie Adams, a retired police sergeant and military veteran, has created a spy thriller that fires on all cylinders. In an era when artificial intelligence and global GPS robs contemporary espionage fiction of suspense, Adams ironically breathes fresh life into the genre by setting his tale firmly in an analog world of telephone booths, muscle cars and printed surveillance photos. Temple’s chances to accomplish his mission rest squarely on him, not a supporting cast of technologists. Accordingly, Adams’ characters often die hard. The book’s fight scenes are savage, bone-rattling affairs that will have readers on the edge of their seats.

The novel is brimming with intriguing characters. Some, like the 380-pound, 7-foot psychopath Eddie Bowman, or Godfather Don Carlo Baresi, add delicious color. Others, like the Vietnam vet who goes by the alias Joseph Johnson, are nearly so developed that they are worthy of their own series. But while Adams juggles a large cast, the story belongs to Temple. Readers will find themselves up long past their bedtime as Temple tries to save the world from destruction.