The Bottom Line: Another remarkable entry in the Jason Scarsdale series. This gritty crime thriller is an absolute gift to fans of the genre.

Austin detective Jason Scarsdale returns in this tale of murder, Texas style. This time, we find Scarsdale – whom Brenham established as a character deserving of our sympathy in his searing crime thriller Price of Justice – investigating a murder at a video arcade. 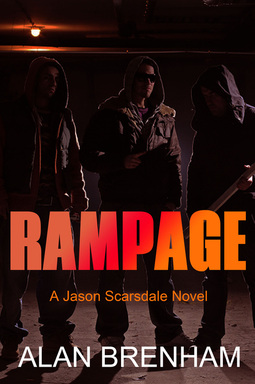 Scarsdale’s new partner, Detective Tatum Harper, is by far the best looking one he’s ever had. Still, he doesn’t like the idea of working with a woman. It’s not just that he’s sexist (he is). It’s also because he’s about to pop the question to the love of his life, Dani (who also appears in Price of Justice). Sensing Harper could be trouble in more ways than one, he decides to run her out of Homicide. He figures it will take him a week, tops.

Enter Recently released convict Justin Cooper, AKA Mad Dog. For him, prison clearly hasn’t been a time of rehabilitation. He returns to the family restaurant owned by his mother and father, but he soon has blood on his hands.

Scarsdale and Harper soon find themselves investigating two murders that appear to be related to the arcade killing. Much to Scarsdale’s annoyance, Harper proves to be incredibly sharp. That doesn’t stop him from giving her a lot of grief. If anything, the more he likes her, the harder he is on her.

Sure, Rampage is about solving an intriguing set of crimes, and the journey is a satisfying one for anyone who loves police procedurals. But far more intense is the dynamic between Scarsdale and Harper, a man and woman working long, tense hours together, and its fallout for those around them. The awkwardness when they run into Harper’s ex-husband is nothing short of delicious. The scene when he finally surrenders to his desires is a masterpiece – deserving of an award for Best Spontaneous Intimacy within a Law Enforcement Setting.

Don’t believe for a minute that any of this makes the good detective unlikable. Quite the opposite, in fact. Even while he tries and fails to hold his messy life together, Brenham has instilled a noble heart within him. It’s impossible not to root for Jason Scarsdale.