The Bottom Line: Paul Christy’s riveting narration and a highly original plot makes Rogue Empire of the best thrillers of 2017. 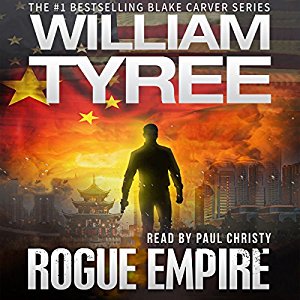 In William Tyree’s Rogue Empire, a botched American drone strike destroys the Chinese embassy in Libya, pushing the two superpowers to the brink of all-out war.

The White House claims the drone was hacked. But if the Americans didn’t do it, who did?

In the hours that follow, Beijing erupts in riots, an American diplomat is murdered and cyber attacks are unleashed on Wall Street.

It’s up to counter-terrorism agent Blake Carver to thwart the most ingenious conspiracy the world has ever known.

Tears of the Assassin, a Memorable Conspiracy Thriller by William Schiele
The Happy Chip, One of the Year’s Best Medical Thrillers