Curvaceous model Bernadette has an amazing house, a close-knit family, a trust fund, and a law degree to fall back upon if she ever grows tired of modeling. What could be missing in her life? Love, of course. 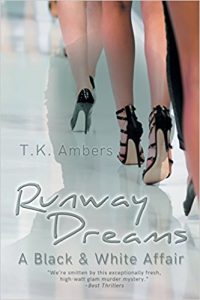 Soon after dipping her designer heels into the world of online dating, Bernadette meets a businessman named Martin Day. Martin is perfect in just about every way. So much so, in fact, that she ignores everyone’s warnings about him. Even Bell, her sister and most trusted confidante, can’t get through the haze of love. Usually levelheaded and rational, Bernadette can’t seem to escape from Martin’s charm and charisma. Will marriage be far off?

Bell and Bernadette’s other siblings make for an eclectic and entertaining crew of gumshoes with a rather bumbling sibling crime-solving. As a result, what might otherwise be a predictable police procedural is full of surprises. As for Bernadette, fans of the Hallmark Channel seasonal movies will spot some similarities in T.K. Ambers’ treatment of her protagonist. On one hand, she’s relatively human and sympathetic. On another, the readers are in on the joke that she’s completely out of touch with reality (“Martin, honey, it looks like the playboy manor threw up in here. What happened?”).

Overall, Runway Dreams is a mystery that, thanks to plenty of light comedy, doesn’t take itself too seriously. But when things finally turn and barrel towards the climax, readers won’t be able to put Runway Dreams down. This is a cast that begs for a second go around, so let’s hope that Ambers is already plotting a series.

Restitution, One of the Year’s Best Thrillers
Longreave, a Mesmerizing Horror Novel by Daniel Barnett