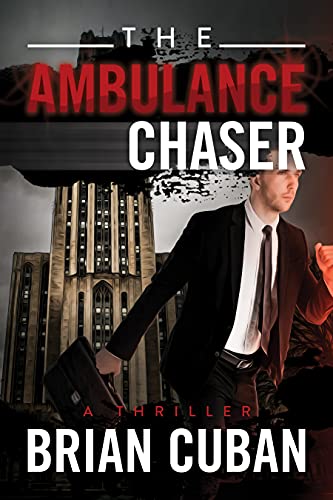 In personal injury attorney Jason Feldman, author Brian Cuban has created one of the more compelling characters to grace the legal thriller genre in recent memory. In a frenetic first chapter that hooks readers for good, Feldman is hit with a mysterious text from a person in his past that blows his life apart. Is David Chaney stalking him? He knows about Jason’s family and professional life. He also knows a dark secret about the murder of a high school classmate 30 years ago.

A sudden whirlwind forces Jason to go on the run and prove his innocence.

The Ambulance Chaser is hardly a story about an otherwise peaceful life blown up by his past. In subtle ways, Jason is both a victim and a predator. Prior to David Chaney’s sudden emergence, Jason’s life burden included dealing drugs part-time to pay for his father’s healthcare expenses (“I wasn’t about to throw my dad into a substandard, understaffed nursing home drenched in his own piss and covered in bedsores”). He’s also socially indebted to his “godfather,” a startup CEO-turned-narcotic trafficker named Kevin who asks favors that would be incredibly time-consuming and emotionally draining for anyone, much less an attorney helming their own personal injury practice.

Throughout, Cuban deftly uses the unreliability of memory as a vehicle for the story’s suspense. Just as Jason’s father suffers from vascular dementia, his own memory becomes his worst enemy. The theme begins with Chaney’s creepy reminiscing about events that are both familiar and foggy, and is reinforced by the entire cast, including Jason’s attorney, Shelly Kowalczyk, who confesses that she can’t remember the events of a party last month, let alone something from 30 years ago. As a theme, the stakes and implications of memory in our lives is staggeringly effective without becoming heavy-handed.

While The Ambulance Chaser includes ample courtroom drama and sharp legal maneuvering, the book stands out from the pack for its personal suspense and life-affirming character development. Highly recommended.