The Bottom Line: A gloriously explosive counter-terrorism thriller on the high seas that injects a much-needed dose of fun back into the genre. 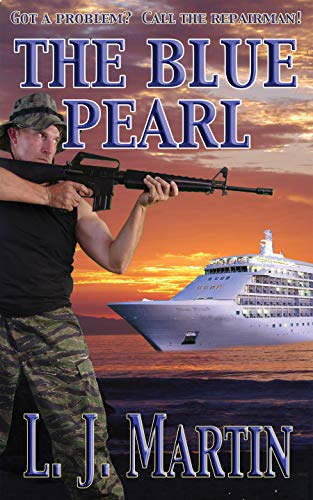 Before pop star Simone Meyer boards The Blue Pearl for a six-week luxury cruise, her father, a famous Hollywood director, tells associates that he’s looking for a down-and-dirty bodyguard to accompany his daughter on the trip. He soon lands a meeting with Mike Reardon, a self-proclaimed “recovery expert” who, after a storied but controversial career in the Marines, has earned a reputation as an elite mercenary.

But Reardon isn’t impressed by Hollywood royalty, and he won’t come cheap. His price? $100,000 plus expenses.

Meyer’s decision to pay up is a wise one. Hiding among the ship’s 600 crew and passengers are a handful of Al Shabaab terrorists who hate Americans and hold special contempt for Jews. Their plan is, roughly speaking, to hold 100 women in exchange for five hundred million dollars in gold. In the event that the American government doesn’t comply, the ship will be wired with explosives and all aboard will go down in flames.

Rest assured that Mike “The Repairman” Reardon isn’t about to let their plan go unchallenged. Reardon may have an intelligence background, but when it comes to protecting Simone and the rest of the innocents aboard The Blue Pearl, he leans toward a barrage of firepower in the hands of a very talented group of individuals. Military thriller aficionados will find plenty of rocket launchers, mortars, sniper rifles to fawn over.

The tenth installment in author L.J. Martin’s series demonstrates what a uniquely readable series hero Reardon is. While unapologetic rogue operators are a dime a dozen, likable mercenaries are rare. What’s more, Reardon is a scrappy entrepreneur with a strong distaste for anything or anyone pretentious, which is in part what makes his business relationship with Hollywood royalty so much fun. As a character, Reardon seems destined for a TV or film series, where his cranky wit would be a welcome break from the stoic, humorless lineup of contemporary action heroes like John Wick and Ray Donovan.

Fans of the series will welcome back Reardon’s business partner and sniper Pax, who graces the book with a healthy dose of smart-ass comments as well as tactical expertise. With that said, The Blue Pearl is also a perfect entry point to series newcomers, as Martin gets right to the action in the opening pages (if your Mercedes is ever stolen, Reardon and Pax are your guys) while sprinkling in just enough backstory for the uninitiated.