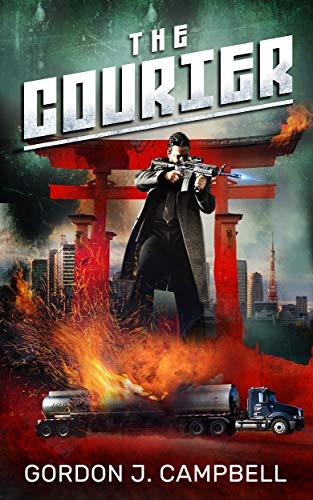 In The Courier’s intense opening pages, four thugs are gunned down by an assassin in Bangkok, a businessman’s contract is brutally terminated in Tokyo, and a DEA agent saves an overdose victim in Charleston, West Virginia.

What’s the connection between these seemingly disparate tragedies? Debut novelist Gordon J. Campbell deftly answers that question over the next 300 pages, writing in bite-sized chapters that rarely fail to pack an emotional or physical punch.

The heart and soul of Campbell’s novel is 40-year-old Canadian Gregg Westwood, a devoted family man and medical sales rep based in Japan. Just as Gregg is double-crossed by his employer in Tokyo, he’s recruited by intelligence agents to deliver a package to Bangkok. As they see it, Gregg’s inexperience in espionage is his biggest asset.

But once there, the handoff doesn’t go as planned, and their new courier is in way over his head. Meanwhile, back in Japan, the life Gregg has so carefully constructed is suddenly at risk.

In what is shaping up to be an incredible year for first-time novelists, The Courier’s edge-of-your-seat plot is eclipsed only by Campbell’s lush landscapes. The claustrophobic density of Shinjuku and the stylish grit of Bangkok leap off the page, while the homeyness of the U.S. Air Base invokes a sense of nostalgia that transcends our era. The Courier is a rather lean book, but Campbell has seemingly chosen just the right details to create an environment for Gregg’s inevitable transformation.