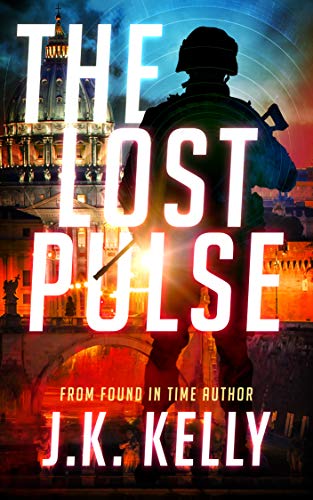 The Lost Pulse is an action-packed military thriller set in a dystopian future where Washington D.C., Beijing, Moscow and Rome are under attack by terrorists. A very special group of U.S. Marines has been handpicked to test a top secret time-traveling technology that enables them to go back in time.

The unit is attacked during a reunion at Camp David, where the President of the United States is rescued. But there’s no time for high-fives. An attack at Guantanamo Bay, the U.S. naval base in Cuba, has left all detainees dead or missing. Worldwide, embassies, consulates, government and military facilities, federal prisons, courthouses, and law enforcement agencies on high alert. The president suspects that there are traitors in their ranks. But who will stop them?

Enter highly decorated Marine Major J.J. Jackson, the heart and soul of J.K. Kelly’s thriller. As heroes go, Jackson isn’t complicated. Jackson is an unwavering patriot who is solely dedicated to eliminating terror threats, and he is more than willing to use futuristic time travel technology in order to get the job done. His personal life is more complex, as wife Michelle – whom he has spent years apart from – wants to become an Army Ranger. While Kelly provides just enough backstory to make The Lost Pulse stand on its own, we recommend reading the series debut, Found in Time, to fully appreciate the relationship between Jackson, his wife and her brother.

Reminiscent of Douglas E. Richards, Kelly’s unique blend of sci-fi and military fiction works well. Kelly’s portrait of a world so threatened by terrorism that no world leader is safe (even the Pope contemplates cancelling Easter Mass) makes this a page-turner.

Dawn of the Assassin, a Series-Worthy Assassination Thriller by Bill Brewer
The Courier, One of the Year’s Best Thrillers