The Bottom Line: A timely page-turner featuring a Mossad agent worthy of her own series. 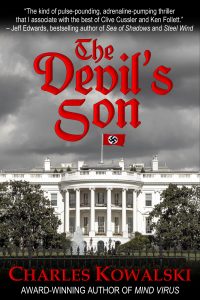 The Devil’s Son opens in 1960s Buenos Aires, as a pair of Mossad agents are set to ambush infamous Nazis Karl Weiss and Josef Mengele. After a chilling brush with their targets, luck is not with them, and the two men go free. As the world knows, Mengele died a free man in Brazil 34 years after the war ended. But what became of Weiss?

Mossad agent Azriel “Azi” Horowitz, now 85 years old, has since risen to become the President of Israel, but the question of Weiss’ fate has never strayed far from his mind. He has never felt at peace knowing he was so close to catching two of the Holocaust’s most notorious war criminals.That’s why, decades later, in present day Tel Aviv, Azi excitedly tells his daughter about an eyewitness account indicating that Weiss eventually fled to Ireland and assumed the name Sean Hale. It seems that Weiss married, became a businessman, emigrated to America, and died in 1985. So why is Azi relaying this information to his daughter, Rachel, with such urgency?

Because Sean Hale had a son. His name is Henry Hale, the leading major-party candidate for President of the United States.

Is Hale following in his father’s genocidal footsteps, or has he become his own person?

One thing is for sure: Rachel is a chip off the old block. Charles Kowalski, author of Mind Virus, has cooked up another gripping thriller by creating a second generation of Nazi hunter in Rachel Horowitz. Going undercover, Rachel sets out to infiltrate the Hale residence and discover who Henry Hale really is.

In a year when racism, Nazi hunters and nationalist immigration policies still occupy headlines in America and around the world, Kowalski’s book couldn’t be more timely. Five years ago, The Devil’s Son would have been an entertaining conspiracy thriller, but it would have seemed utterly implausible. The same can’t be said today. Kowalski effectively taps into the modern-day political zeitgeist without making his readers – regardless of their party affiliation – uncomfortable. Bravo.

Finally, in Rachel, Kowalski has created a heroine that is gutsy and, given her training, intrepid. Let’s hope Kowalski builds a series around Rachel Horowitz.