The Bottom Line: Expected the unexpected in this philosophical conspiracy thriller about karma, enlightenment and the survival of humanity. 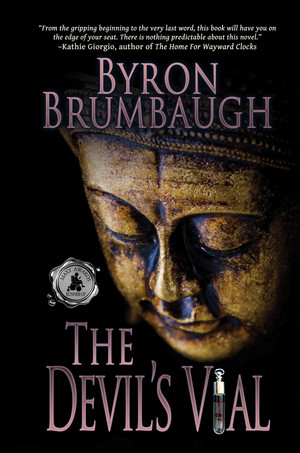 When Dr. Richard Gregg receives a disturbing phone call telling him that his girlfriend has been abducted, he follows the kidnapper’s instructions to the letter, getting into his car and heading to an abandoned home. Thankfully, his girlfriend is still alive, but the good doctor’s nightmare is just beginning. The perpetrator, an attempted suicide patient Richard treated in the emergency room in the distant past, wants revenge for what he sees as the doctor’s negligence. He gets it in the most shocking way imaginable: he forces Dr. Gregg to kill him.

Hopelessly traumatized, he leaves his life and flees to India to for a prolonged period to study Buddhism. Upon his return, he immediately finds himself in a multi-car collision that lands him back in ER as a patient (in this passage in particular, author Byron Brumbaugh’s meticulous attention to detail creates a world that is fully tactile). Richard quickly befriends the physician on duty, Dr. Alex Stewart. But before long, both men’s lives are in danger. Enter Emily Clark, a member of the Newark Police Department, who says she’s been tasked with protecting them.

They’re soon
immersed in an effort to save humanity from the most deadly bio-attack imaginable.

In early chapters, you might find yourself sympathizing with Richard’s frustrated girlfriend, who is understandably baffled by Richard’s guilt: “Oh, for chrissakes, Richard! The man was deranged. He almost killed me! And if it wasn’t for you, I’d be dead!” But throughout, the paradox between Richard’s pacifist disposition and what he must do is precisely what gives The Devil’s Vial its edge. By the time it becomes clear that his expertise is sorely needed to foil a
widespread conspiracy, his pronouncement that he’ll help so long as it doesn’t run counter to Buddhist principles is actually quite thrilling, and watching him wrestle with his scruples in the face of almost certain doom is satisfying indeed.

The Woman in Cabin 10, a Crime Thriller by Ruth Ware
Into the East: The Razing, a Supernatural Thriller by J.A. Davis