The Bottom Line: An epic and bewitching mashup of historical suspense and political thriller. Perfect for fans of Steve Berry and James Rollins. 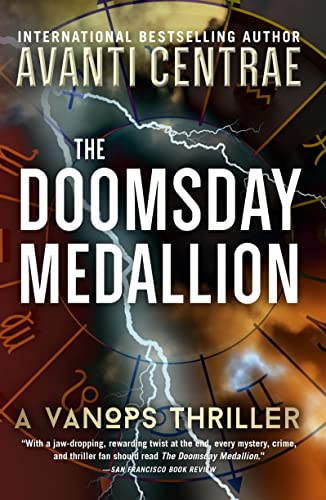 Sixteenth-century French prophet Nostradamus is said to have predicted the Great Fire of London, the French Revolution, the rises of Napoleon and Adolf Hitler and both world wars. In Avanti Centrae’s The Doomsday Medallion, we learn that Nostradamus may have used a secret medallion to put himself into a prophetic trance. If true, it could be used for gaining an insurmountable military advantage – especially if it falls into the wrong hands.

Sixteen-year-old Avril is a seer who lives in the same town where Nostradamus lived hundreds of years prior. Soon after the girl predicts a military takeover in the South China Sea, Chinese agents move in to try and kidnap her. Meanwhile, American intelligence operatives Maddy Marshall and her twin Will Argones, both of whom work for a group called VanOps, have been assigned to protect Avril.

Author Avanti Centrae has created a reality where global superpowers – notably Russia and China and the United States – have been developing parapsychology programs. In a world where the CIA’s experimentations with LSD and other psychotic drugs are now well known, Centrae’s fictional accounts of intelligence agencies attempting to use out-of-body experiences, remote viewing and even remote killing don’t seem far-fetched in the slightest. Centrae perfectly renders the potential of powerful magic within the context of sophisticated geopolitical danger, resulting in a story where high stakes are palpable and danger lurks around every corner. Expect plenty of mythical side trips, including references to Michaelangelo and Alexander the Great.

Plot-wise, The Doomsday Medallion is serviceable as an entry point to the series. However, we recommend starting with the first two series books prior to tackling Book 3. Questions about the origins of the VanOps group, as well as Will and Maddy’s credentials, are likely best addressed in the first two installments.