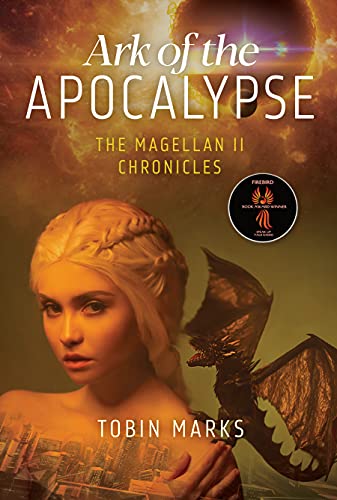 Tobin Marks’ Ark of the Apocalypse begins on 1930s-era Earth as a metallurgist braves genocide and impending war to acquire red amber from the Baltic Sea and green amber from Norway. He smuggles the material into Russia, where he eventually creates two medallions (“dragon eyes”) which he fits into his eye sockets. The result is something akin to astral projection. Soon after, he’s murdered by the authorities while his wife, a physician, and their children are left to endure a hellish journey through World War II and afterward.

Years later, a woman astrally projects into Russian cabinet meetings to eavesdrop on classified strategic military discussions. Along the way, the female U.S. president delivers an ultimatum to the Russian president to get his people out of Tehran ahead of an impending U.S. attack which is retaliation for 117 American and 362 British nationals on those oil platforms. The nuclear issue is front-and-center in key sections, which is often the case in stories depicting the demise of Earth.

You’ll notice that this is a review without character names, and that’s deliberate. Like George R.R. Martin’s Game of Thrones series, Marks packs this ambitious 415-page novel with characters and scenes that come and go across eras and timelines. There’s no point in getting too attached to any one character en route to the climactic portions of the book, which is essentially an interstellar interpretation of the Noah’s Ark story (with a very clever inversion of the role water played in the Biblical version). The effort will send 10,000 colonists on a ten-year voyage to a planet called Kepler 3211a, where they plan to create a colony. While the book cover hints at the exotic life they may find there, I’ll refrain from delivering additional spoilers except to say that readers are in for some fiery surprises.

On the surface, it would seem that Marks has packed far too much plot into a single book. And yet it actually works. The vast majority of the novle’s well-crafted scenes are filled with enough science, fantasy, emotional heft and suspense to work as a largely satisfying stand-alone story. In many ways, Ark of the Apocalypse is a collection of richly drawn vignettes that add up to a complete narrative. Many of the book’s major characters are deserving of an entire series, and that is both the novel’s challenge and one of its charms. Highly recommended.