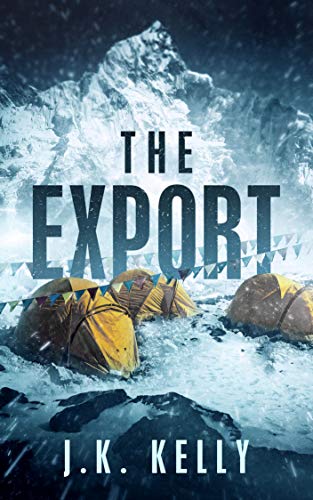 Former FBI investigator Matt Christopher, also known as “the export,” is an intelligence agent for hire whose ties to the bureau run deep.

As J.K. Kelly’s novel begins, Matt is recovering from a boozy Mount Everest base camp party when he learns of a murder on the mountain. A hiker from London had apparently been hitting on a woman at the party the night before, only to be found the next day with an ice axe in his head.

Matt investigates the victim’s tent, only to find that the crime scene has been destroyed. Interviews with other partygoers prove fruitless. So who is the ice axe killer?

Finding the answer to that question is put on hold, since Matt has several other irons in the fire. In London, he’s asked to look into someone who has allegedly stabbed five people. In Washington D.C., the Director of National Intelligence — who also happens to be Matt’s aunt — tasks him with heading to Quebec to keep tabs on a troublesome U.S. assistant undersecretary.

Author J.K. Kelly uses much of The Export to build Matt’s expansive world of contacts, credentials and love interests. Given the rule that the FBI does not operate internationally barring special circumstances, Matt is believable as an in demand jack-of-all-trades contractor.

He’s also human in all the right ways. As such, he’s hardly immune to romantic relationships with colleagues, as is the case with Claire Dale, his FBI handler.

John Le Carre fans will appreciate Kelly’s measured approach to developing Matt’s character as a master of spycraft who also manages to be vulnerable. Less patient readers may wonder whether Matt’s myriad global activities will eventually tie together, but fear not. Kelly ensures the book’s storylines come full circle in the final chapters, setting up readers for a mouth-watering series.