The Bottom Line: Author L.J. Martin had me at “secret mission into North Korea.” 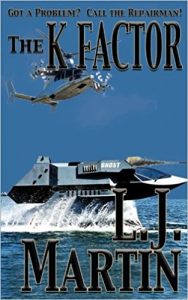 North Korean ambassador to China Kim Hyun-hee has indicated that he’s willing to defect and spill the country’s nuclear secrets. There’s only one thing standing in his way: doing so would be a veritable death sentence for his entire family.

American intelligence decides that a secret mission to extract the family is worth the risk, and they turn to former marine Mike Reardon, known as the repairman, to do the job.

Never mind that Reardon and his crew will be outnumbered two hundred thousand to one. There’s a good deal of strategy involved, including sinking a captured ship, but the real reason to read this, the ninth installment of L.J. Martin’s Mike Reardon series, is for the highly entertaining chemistry between Reardon and his wingman, Pax Weatherwax. Pax is a veteran of Desert Storm whose dialogue is always hilarious (“I can eat the ass out of a skunk”) and his loyalty to Reardon is never in doubt.

For his part, Reardon adds more authentic flavor to this adventure than the legion of Jack Reacher also-rans in contemporary literature. A Wyoming native, Reardon is modern-day cowboy through-and-through, full of folksy dialogue that always calls back to his roots. Reardon knows his way around a barn, and when he says “saddle up,” you know he’s qualified.

Written in the present tense, The K Factor isn’t complicated. It’s a quick, high-octane read and the perfect entry point for newcomers to the series. If you’ve ever fantasized about how the U.S. might strike a blow against “Dear Leader” without sending the entire Korean peninsula into chaos, this book is for you.