The Bottom Line: A first-rate crime thriller with plenty to say about the rise of artificial intelligence. 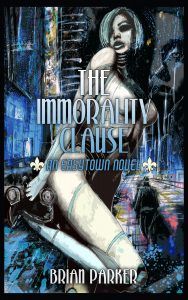 New Orleans homicide detective Zach Forrest must track down the serial killer. When he arrives at a sex shop to see the latest victim, a forty-eight-year-old male who had been torn to shreds, he finds a biblical verse written in blood: JOB 36:14; “They die in youth, and their life ends among the cult prostitutes.” Later, the medical examiner finds that the victims’ intestines have been removed.

Not long after, the navigation system on Zach’s Jeep is hacked. When Zach’s car crashes into a lake, white sodium azide powder explodes from the airbag. It’s a thrilling scene in which the hunter becomes hunted.

In Zach, Parker has created a likable hero who is more than worthy of a thriller series. As society grapples with early AI such as Siri and Alexa, Zach’s internal conflict with much more sophisticated technology is hugely relatable. His personal “AI,” Andi, is the only woman who understands him. She knows what he needs before he does, and it’s through their relationship that we see who he really is. But his comfort level doesn’t extend to the machinery that augments other areas of life, such as the lifelike sex workers that are simultaneously tempting and disturbing. But he’s hardly a luddite compared to his best friend, Amir Khalil, who refuses to purchase an AI and still has to do manual tasks like going to the grocery store himself. It’s a fascinating juxtaposition that works well in the hands of such a gifted writer.

Parker’s futuristic New Orleans, wetter and colder than it is today due to climate change, is a terrific setting for his brand of contemporary noir. The Immorality Clause is perfect starting point for the series, and a feast for any noir fan.

The K Factor, a High-Octane Action Thriller by L.J. Martin
The Repatriation of Henry Chin, a Spellbinding Political Thriller by Isaac Ho