The Bottom Line: A daring, razor-sharp psychological thriller that will please fans of both Stieg Larsson and E. L. James. Walls deftly packs in everything readers want in a suspense novel: danger, scorn, betrayal and eroticism, which it delivers in spades. 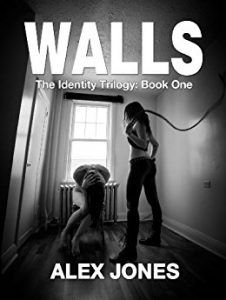 In Walls, psychologist Dan Whitney and his wife Michelle set off for Palm Springs in hopes of putting some spice back into their marriage. The fix? A vacation at a nudist resort.

But when there’s a problem with their room, the Whitneys find themselves the guests of resort owner Philippe Morel, who puts them up in the estate he shares with his long-suffering wife, Francesca. It’s a great setup for a harrowing foursome that you won’t soon forget.

In creating Morel, author Alex Jones – himself a clinical psychologist – has drawn upon a long literary tradition of wealthy hosts that prey upon the misfortune of their guests. Although Morel doesn’t have fangs or a black cape, it’s impossible not to draw comparisons with Dracula. Morel is charming, rich, sadistic and manipulative, all of which makes the book difficult to put down.

This, the first of three novels in Alex Jones’ Identity Trilogy, features a complexity of emotional characterization rarely seen in the genre. The book is told from the perspective of multiple characters. Over the course of the book, even more gripping than Morel’s seduction of the Whitneys is the terrifying relationship he shares with his wife. Particularly compelling are those chapters told from the perspective of Italian-born Francesca. Over time, she becomes the book’s emotional centerpiece, harkening back to a time when she was free of the mess her life has become. The psychological “walls” with which she uses to cope are endlessly riveting. With the arrival of the Whitneys, the things she must do to further her husband’s dark plans, and her desire to reinvent herself, are – surprisingly, perhaps – mutually beneficial.

Considerably darker than 50 Shades of Grey, Walls is a new breed of thriller that includes themes of dominance, submission and fantasy en route to an explosive finale that will leave you pining for the next installment.