The Bottom Line: Scott Pratt’s anti-hero Darren Street isn’t particularly likable, but that’s vigilante justice for you, and the book is no less riveting for it. Recommended. 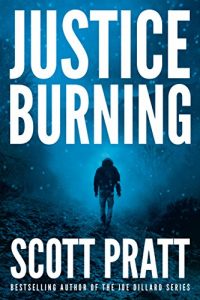 Former defense attorney Darren Street is desperately trying to put his life back together after spending two years in a maximum-security prison for a murder he didn’t commit. He’s rebuilding his law practice, reconnecting with his son, and falling more deeply in love with his girlfriend, fellow attorney Grace Alexander.

But the past casts a long shadow, and for Street, there’s no outrunning it.

Tormented by nightmares and violent mood swings, Street is seeking treatment for PTSD when a new trauma shakes his world: his mother is killed in an explosion, but the police believe Street was the intended target.

Payback from an old enemy, or the calling card of a deadly new foe? Whoever’s behind it, Street begins to lose his grip on reality and decides to take matters in his own hands. And the law won’t stop him from revenge.

Justice Burning isn’t necessarily a slam dunk for fans of Pratt’s straight-ahead legal thriller Joe Dillard series, but for every one else, it’s a great entry to Scott Pratt’s many talents.